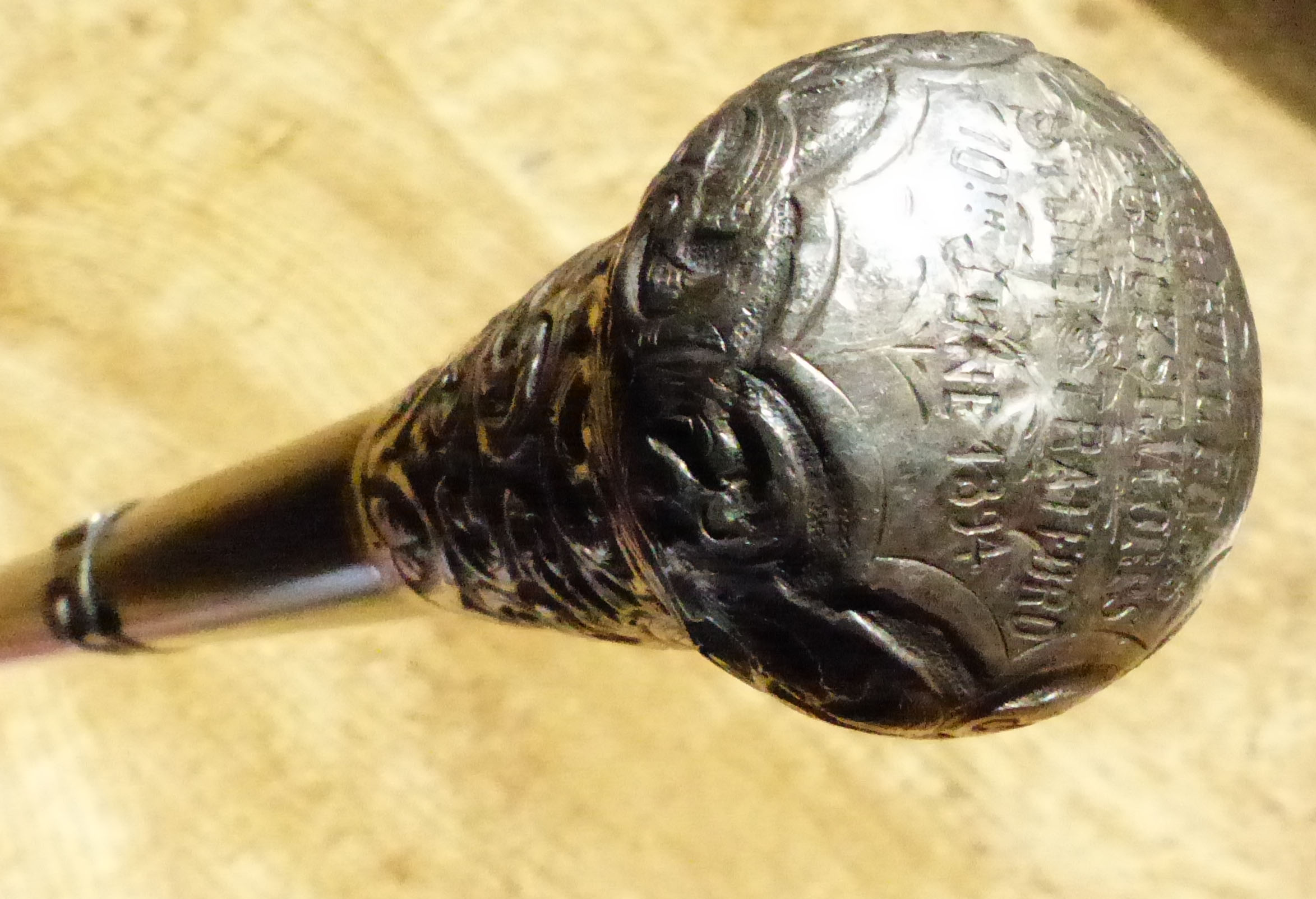 The silver topped stick is is inscribed W. H. Bull, FRCS, 1st Bucks RV Corps, Stony Stratford, 10 June 1894. The Bearer Company was formed in 1880, an earlier one at Stony Stratford having been attached to the Northamptonshire volunteers.

Born on 16 June 1852, William Henry Bull was originally from Oswestry, qualifying at St George’s Hospital in 1874, and taking over the medical practice at Stony Stratford, where he resided at St Oswald’s House, in 1876. He formed the Bearer Company at Stony Stratford in 1880, becoming FRCS in 1882. Subsequently, he commanded the Home Counties Volunteer Brigade Bearer Company – still effectively that of Stony Stratford – in 1888 and, on the formation of the Territorial Force, the 2nd South Midland Mounted Brigade Field Ambulance in 1908. Bull served as Assistant Director of Medical Services for 48th (South Midland) Division from August 1914 until the division moved to France in March 1915, and then acted briefly in the same capacity for 61st (2nd South Midland) Division until it moved to Chelmsford from Northampton in April 1915. Subsequently, he became medical officer of six counties in the Southern Division before moving to the Ministry of Pensions as Commissioner of Services for the West Midlands. One his sons, Lieutenant Godfrey Bull of the 2nd (East Lancashire) Field Company, Royal Engineers, was killed at Gallipoli in July 1915. Two others – Captain H. C. H. Bull of the 8th King’s Own Yorkshire Light Infantry, and Captain Edwin Bull, RAMC – both won the Military Cross.

Bull, who was twice widowed, reached the rank of Surgeon-Colonel and held both the Volunteer and Territorial Decorations. In 1913, he became both a Knight of the Order of St John, and also an honorary surgeon to the King. Having been a long-time magistrate, he was appointed a deputy lieutenant for Bucks in 1919. After the Great War, he was county director of the Bucks County Territorial Association Voluntary Aid Detachments (VADs). A keen freemason, he was also president of the Stony Stratford Library and Debating Society, and of the Stony Stratford Town Band. He died on 14 August 1921, receiving a military funeral attended by large numbers of mourners.