Our “Secret Buckinghamshire” Webinar Series continues with three more talks coming up in the autumn. The talks will be hosted on Zoom and registration details will be published in due course. In the meantime, dates and and subjects are as follows:

A Primrose Path: The Gilded Life of Lord Rosebery’s favourite Son by Martin Gibson is being republished by Arum Press. The Hon. Neil Primrose, second son of Lord Rosebery and Hannah Rothschild of Mentmore, was Liberal MP for North Cambridgeshire from 1910 until his death in 1917. He was briefly Under Secretary of State at the Foreign Office in 1915; and then Liberal Chief Whip in 1916 alternating parliamentary and active service in the 1/1st Royal Bucks Hussars, in which he was commissioned in 1909.

Primrose was killed in action against the Ottoman Turks at Abu Shusheh, Palestine on 15 November 1917 whilst serving with the regiment. Two days previously, he had taken part in the charge at El Mughar.

The result of extensive research, Martin Gibson’s book tells for the first time the story of this member of the Liberal political elite, including his friendship with a previous officer of the Royal Bucks Hussars, Thomas Agar-Robartes, briefly Liberal MP for Bodmin in 1906 and for Mid-Cornwall (St Austell) from 1908 until his death in 1915. Agar-Robartes transferred from the Royal Bucks Hussars to the Coldstream Guards in January 1915 and was killed in September that year.

Available in hardback @ £20 plus p&p direct from the publishers, www,arumpress.co.uk/books 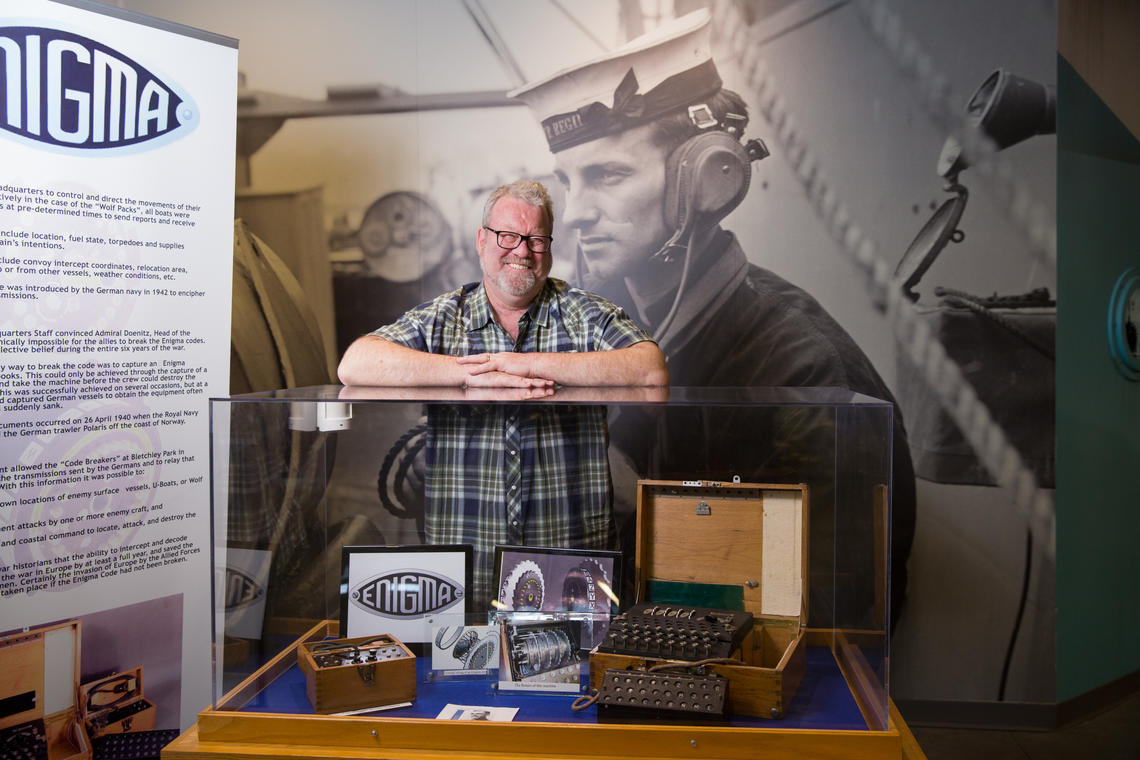 History Professor John Ferris has been named the “Authorized Historian” in chronicling the history of its British communications intelligence agency (Government Communications Headquarters). Ferris stands next to an Enigma machine, a type of enciphering machine used by the German armed forces to send messages securely.

In the first of a series of talks on ‘Secret Bucks’ in WW2, Professor Ferris will discuss the role of the Bletchley Code-breakers in Allied victory

Professor Ferris is Professor of History at the University of Calgary and was selected to write the first authorised history of the Government Communications Headquarters (GCHQ) in 2017. Behind the Enigma: The Authorised History of GCHQ, Britain’s Secret Cyber Intelligence Agency was published in 2020. It challenged the myths of ‘eccentrics overcoming the odds, the enemy, and the establishment’.

You can now view the talk on YouTube here: https://youtu.be/wxqawCqx_fs

Identifying an unknown officer of the 5th Battalion, Oxfordshire and Buckinghamshire Light Infantry lost at Arras in May 1917 whose remains were found in 2013

Membership of the Buckinghamshire Branch of the Historical Association costs £12 annually from October each year.

In the opening hours of D Day – 6 June 1944 – a small glider-borne coup de main force from the Oxfordshire and Buckinghamshire Light Infantry seized key objectives in Normandy ahead of the main landings which marked the start of the invasion of Europe.  This is the story of the men in this operation, what happened when they hit the ground, how they took on their German enemies and why their actions that day will always be remembered in that part of France.

This lecture is one of the Army Flying Museum’s Lockdown Lecture series and was created in partnership with the Soldiers of Oxfordshire Museum.

There is no ticket charge or pre-registration required for this event, but please consider donating if you enjoy the talk–

This year, the popular annual history fair is going all-digital, in response to the challenges of COVID-19. In collaboration with local museums, libraries, and cultural organisations, there is an exciting, varied programme for all ages. Sign up for email updates, or follow on Facebook, Twitter, and Instagram.

The Great War In and Around Stone

Launch of “Whitchurch, The Fallen and the First World War”, by Professor Ian Beckett

Donation to the Trust

The Trust is delighted to announce that it has received a grant of £1,300 from the Bucks Masonic Centenary Fund and a further donation from the Grenville Lodge towards the cost of a computerised MODES system. This will enable the Trust to fully document its collections and continue to meet Museum Accreditation requirements.

Thank You Event for the World War One Generation

Entertainment from the Rockabellas, the Halton Military Wives Choir, J’s Joyful Divas, the Chiltern Poetry Society, and the Buckinghamshire Band of the Royal British Legion