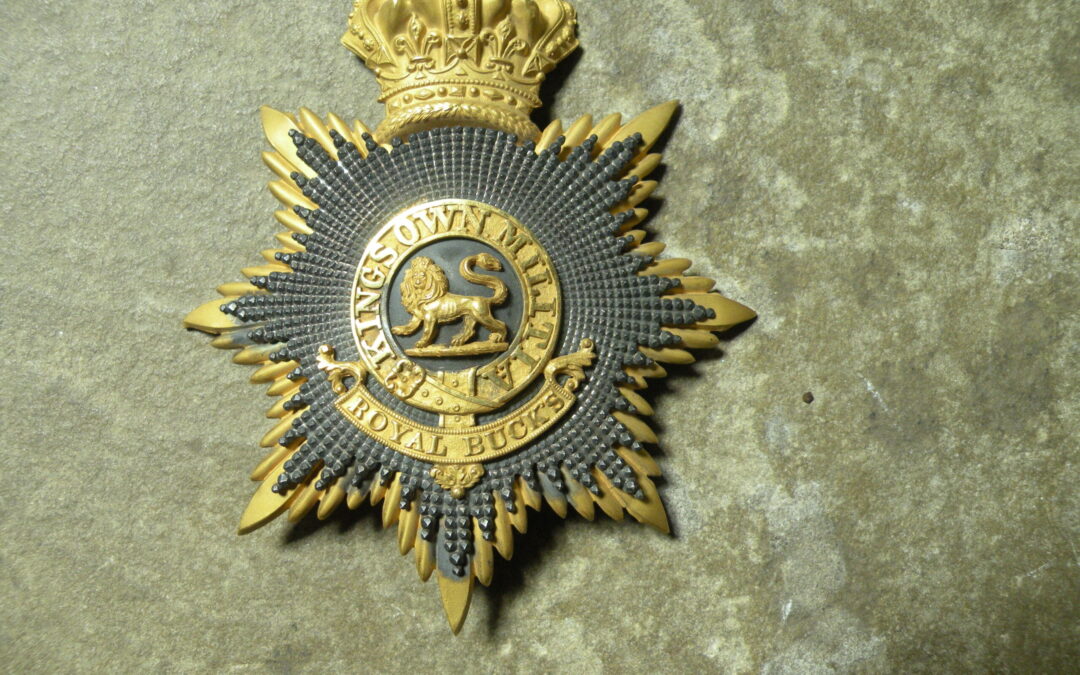 Officer’s Shako Plate of the Royal Bucks King’s Own Militia, 1855-61

The so-called French Pattern Shako was adopted in 1855 to replace the earlier 1844 Albert Pattern, named after the Prince Consort. The shako had first been introduced into the British army in 1800 and evolved in various patterns until the 1869 pattern was replaced by the Home Service Helmet in 1878. Officer’s Shako plates were of high quality silver and gilt.

The militia was revived in 1852 as a result of a French invasion scare, having fallen into abeyance in 1831 with the suspension of the last compulsory ballot. Commissions had still been issued and appointments made to the permanent staff of the Royal Bucks King’s Own Militia but in 1852 there were six officers still serving who had been with the regiment in the Napoleonic Wars, two of them over 70 years of age. New legislation in June 1852 created a militia now to be raised on the basis of voluntary enlistment although the requirement to undertake a continuous period of 21 days’ training each summer precluded those in regular employment from enlisting. The militia, therefore, continued to rely upon the casually employed to fill its ranks. Nine-tenths of the new Royal Bucks King’s Own Militia – the county’s quota was 466 men – were reported as agricultural labourers. Officers were still required to fulfil a property qualification until 1869 and the officers of the 2nd Lord Carrington, who commanded the Royal Bucks until his death in 1868, were drawn primarily from the county’s landed gentry. Indeed, Carrington discounted most applications from former regular officers. The militia was liable to permanent service in wartime and the Royal Bucks was embodied for garrison service from June 1854 to May 1856 during the Crimean War.